He Holds My Hand

David knew about strong adversaries seeking his life.  But David also had a very strong faith in God to lead Him every day of life.  Consider Psalm 34:23-24, page 890 which David wrote.

The steps of a man are established by the LORD, and He delights in his way. When he falls, he will not be hurled headlong, because the LORD is the One Who hold his hand.”

In Psalm 34:23, page 890, David wrote that the steps of a man are established by the LORD.1The Hebrew term for “steps of a man” (“מִצְעֲדֵי-גֶבֶר”) has several interesting features. First, the term “steps of a man” also appears in the same construct form in Proverbs 20:24 (“Man’s steps are ordained by the LORD, How then can man understand his way?”). We see that God establishes the steps of a man, but that only God ultimately understands the path of life for a man.  Second, the Hebrew term for “man” in this construct identified a strong man, as distinguished from a woman or a non-combatant.  God emphasized with these words that God establishes the steps of very strong men, who trust in Him. As a soldier prepares for battle, by being on strong, stable ground, so also the LORD established the steps of the warrior-strong man. As a believer, I should rest in the certain knowledge that God has a carefully crafted plan for my life.  God established the steps of my life.2The Hebrew term “established” (“כּוֹנָנוּ”) occurs in the polal (intensive) stem. This same word helps us understand how the term “established” describes our lives under God’s hand.  In Exodus 15:17, page 113, within the Song of Moses, God declared that He would bring His chosen people into the dwelling place of the LORD, a sanctuary established (“כּוֹנָנוּ”) by His hands. In Psalm 11:2, page 865, this same word “established” described the arrow placed (“כּוֹנָנוּ”) upon the bowstring. In Ezekiel 28:13, pages 1343-1344, God described the covering with precious stones “prepared” (“כּוֹנָנוּ”) by God for Satan, the covering cherub, before he fell in sin. Not only that, God “delights”3The Hebrew term for “delights” (“יֶחְפָּץ) indicated that God truly loves to control the paths of our lives, so that we will glorify Him. God has prepared good works for us, that we should walk in them (Ephesians 2:10, page 1828), so that we may walk by faith, not works. in my way. The LORD has a very personal and powerful interest in every single step I take, and in every move I make. The God of the Old Testament has an intense interest in every believer, and the God of the entire universe delights in the steps of man following His paths. When we tend to struggle with small faith and troubles, we can always look to these verses for strength and encouragement. The LORD delights in our ways, and establishes our steps. He knows, He cares, and He arranges every step according to His perfect, all-knowing plans for our lives.

In Psalm 37:24, page 890, God revealed that all believers should expect to fall. The original language translated “When he falls” means that even the strong man, in whom the LORD delights, will still fall.4The Hebrew phrase “When he falls” (“כִּי-יִפֹּל”) described the certainty of falling, just as 1 John 1:8, 10 in the New Testament express the same theme: even believers still sin. We learn here that God has a wonderful plan for our lives, and establishes the steps we take. But even strong, mature believers still fall into sin. God promises, however, that He would hold on to my hand, so that I would not be hurled headlong.5The Hebrew term for “shall not be hurled headlong” (“לֹא-יוּטָל”) appears in the same Hophal form in Proverbs 15:33, where the dice are caused to be thrown into the lap. The mental picture there and in Psalm 37:24 brings to mind the idea of dice tumbling and rolling.  So also would be the man thrown down, tumbling and rolling. Instead, the believer never tumbles and rolls as the unbeliever because God holds the believer’s hand. The same root word also described the LORD as He hurled a great wind upon the sea, causing a great storm for the boat carrying Jonah away from Ninevah (Jonah 1:4, page 1448), Again, the LORD hurled the Egyptians pursing the people of Israel into the depths of sea, “like a stone into raging waters” (Nehemiah 9:11, page 779).  These images show that the LORD preserves the believer even when he sins, so that the LORD does not hurl him as wind arousing a storm, or a stone cast into raging waters to be tossed about underwater. Instead, Jesus tells us that He will hold our hand, and we will never be hurled headlong. What a blessing for all of us! As a teenager, I used to surf in some rough waves.  At times, I would be hurled by the wave underwater, and tossed about. Fortunately, I always came back to the surface in time for a breath. In the same spiritual sense, God will never allow you to be pulled so far underwater that you cannot come up for a breath. In fact, God emphasizes in this verse that when you sin as a believer, God will always hold your hand, so that you will never drown spiritually, no matter how great the waves breaking over you. 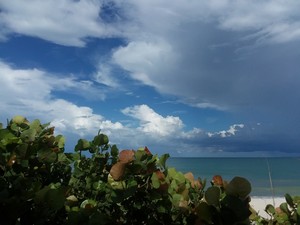 We use cookies on our website to give you the most relevant experience by remembering your preferences and repeat visits. By clicking “Accept All”, you consent to the use of ALL the cookies. However, you may visit "Cookie Settings" to provide a controlled consent.
Cookie SettingsAccept All
Manage consent

This website uses cookies to improve your experience while you navigate through the website. Out of these, the cookies that are categorized as necessary are stored on your browser as they are essential for the working of basic functionalities of the website. We also use third-party cookies that help us analyze and understand how you use this website. These cookies will be stored in your browser only with your consent. You also have the option to opt-out of these cookies. But opting out of some of these cookies may affect your browsing experience.
Necessary Always Enabled
Necessary cookies are absolutely essential for the website to function properly. These cookies ensure basic functionalities and security features of the website, anonymously.
Functional
Functional cookies help to perform certain functionalities like sharing the content of the website on social media platforms, collect feedbacks, and other third-party features.
Performance
Performance cookies are used to understand and analyze the key performance indexes of the website which helps in delivering a better user experience for the visitors.
Analytics
Analytical cookies are used to understand how visitors interact with the website. These cookies help provide information on metrics the number of visitors, bounce rate, traffic source, etc.
Advertisement
Advertisement cookies are used to provide visitors with relevant ads and marketing campaigns. These cookies track visitors across websites and collect information to provide customized ads.
Others
Other uncategorized cookies are those that are being analyzed and have not been classified into a category as yet.
SAVE & ACCEPT
Family Ministry Center